This poker game happened live on national television and the Jews at the poker table down-played Russian and Native American genocide. During this poker game the Jews of trash reality-TV defined for us Goyim what constitutes genocide.

According to jewish minds, genocide shouldn’t be labeled “Genocide” if it involves the eradication of a racial group so as to steal their land, without a political agenda or hatred. I think this just means that if Jews are eradicating a racial group it should not be called Genocide, as was the case in Soviet Russia and in Palestine. During the discussion, National Socialism was thrown under the bus, as if it had relevance in the discussion.

You’ll just have to watch. 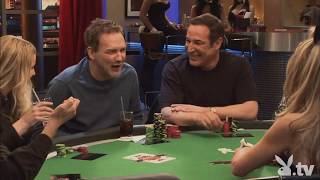 Norm Macdonald has never shied away from making fun of people’s perception of World War II and Adolf Hitler. He has an uncanny ability to troll  Jews; he is really a master at it. The best part is at the four minutes mark into the following video where Norm suggests that he wishes he could travel in a time machine to go back to kill Hitler, but he is afraid that he would fall in love with Hitler’s baby blue eyes after gazing into them, hypnotized by his dark seductive power. When under Hitler’s spell Norm says he would join the Third Reich and abandon his assassination mission.

Norm should be fired for “Hate Thought Crimes” for down-playing Jewish fantasies of jumping in a time machine to kill Hitler! 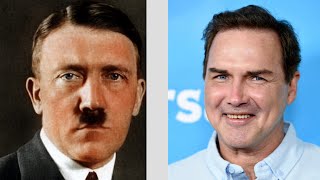 Renegade Editor’s Note: Norm is still working in Hollywood’s jewish comedy industry, so he is still be considered a good goy. Perhaps he does harbor some disdain for the jewish freaks running the show, which slips out from time to time when drinking, but don’t expect him to really bite the hand that feeds.