Pulp fiction was a Neo-Noir film released in 1994. I am a fan of the film and I think that Irene Zisblatt is too. My theory is Irene Zisblatt’s story of defecating diamonds was ripped off from Captain Koon’s monologue.

Captain Koons, played by Christopher Walken, interrupts a young boy named Butch from watching “Clutch Cargo” during his after school television time. Captains Koons explains to the boy that he has brought a gold watch that’s been passed through generation to generation through the Coolidge family since World War One. Captain Koons knows Butch’s father because they were POW prisoners together for 5 years during Vientma. Koons tells Butch his father died of dysentery, but before he died he requested that he would give his son a special watch. Butch’s father had been hiding the watch in his rectum for five years until his death, and then the watch went to Captain Koons, who had the responsibility of hiding the watch in his rectrum him for two years. Both men kept the watch in their rectums so the Vietcong prison guards would not take the watch away. 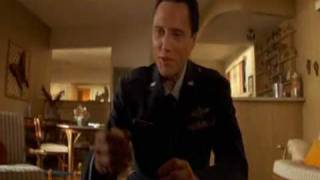 In 1995 Irene Zisblatt gave her testimony of the so-called Holocaust for the Academy Award-winning documentary film “The Last Days” (1998) by Stephen Spielberg. Not every testimony that Stephen Spielberg collected was irrational, but apparently he was only interested in the Left field. Irene claims that her mother handed her some diamonds originally rolled up in her skirt to use in case she needed money for food. She lost the skirt and feared her diamonds being confiscated by the Nazi prison guards, so she decided to digest the diamonds and then fish out her excrement to retrieve the diamonds, every day… for years.

I get moved when talking about bowel movements. I shed tears of sorrow for Irene Zisblatt as I did the first time I listen to Christopher Walken’s Pulp fiction monologue.