The show was broadcast live in Israel for the first time ever!

Gal Gadot is the Jewish Wonder Woman, and she was feeling lonely during her SNL monologue, since all her Israeli comrades were overseas. Gadot did part of her monologue in some Durka-Durka gibberish language, communicating directly to the Chosenites in the Middle East. At first glance I thought she was pledging alliance to ISIS (Israeli Secret Intelligence Service).

After I read the translation of her heeb speak, she schooled me on to the fact that there are no Israeli writers on SNL’s writing crew. I will send this video to snopes.com (a fact checker site) to confirm that. Regardless, under Lorne Michael’s watchful nose, there are sure to be plenty of non-Israeli jews with their hebraic humor (poop jokes, homosexuality, and incest are apparently hilarious).

The writers were just not sophisticated enough for Gadot’s chosen taste, though. (Apparently they did not know that Israelis actually culturally appropriated hummus.)

Gadot did not come out as Wonder Woman, and instead black SNL cast member Leslie Jones came out as a Times Square Wonder Woman who takes photos for German tourists. “Oy vey, those stupid German goyim!” 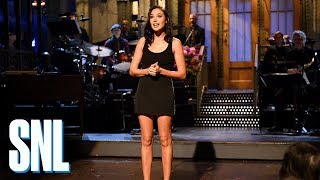